I have configured WIZ750SR-110 as my server in DHCP mode. (Noted its IP address and Port Number).

WIZ750SR-110 is connected to a Desktop using Serial Interface and the other end (Ethernet) is connected to RJ45 cable. The Desktop is running Putty to display incoming data on Desktop Screen and is configured correctly. (Baud Rate, data size, start and stop bits and Flow control match that of WIZ750SR-110).

On the transmitting end is a Laptop that runs SSH terminal window using Putty. and the terminal is configured to connect to my server (WIZ750SR-110) using the IP address and Port number that was earlier recorded.

THE PROBLEM:
Now, when I start Putty on the transmitting (Laptop/client) side with SSH terminal, the receiving end Putty (Desktop/serial port) displays a message “SSH-2.0PuTTY_Release_0.71” and the configuration terminal of WIZ750SR-110 shows CONNECT as its status.

When I try typing any data into SSH Terminal Putty, nothing gets displayed on the Serial Port Putty.

Can someone help or tell where I am going wrong?

Thank you in advance.

Note: I have enabled character display under PuTTY settings so there is no issue on PuTTY side.

Can you share the screenshot of your configuration tool?
It would be helpful for me to figure out the reason.

So here is the server side terminal window with serial port of S2E connected to my Desktop PC: 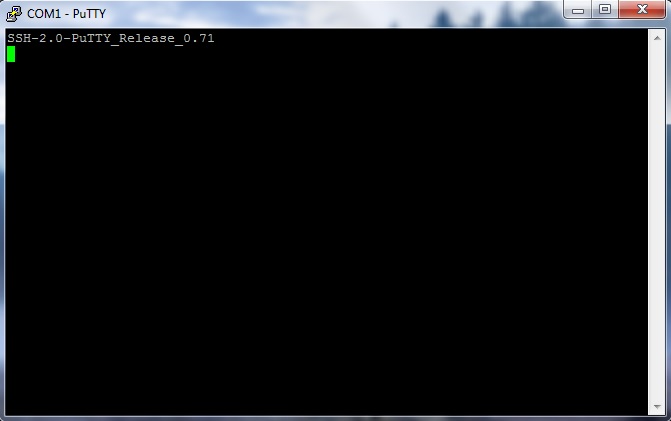 And my Client side connected to laptop running SSH Terminal using PuTTY is blank.

As soon as the connection to the server is established from client, the text “SSH-2.0-PuTTY_Release_0.71” (the client side PuTTY details) get displayed on the serial terminal window on Desktop.

Now after establishing connection, whenever I enter any text on either of the Terminals, nothing displays on the other end. Also, the TXD and RXD UART Leds do not light up (one possibility is it is too fast a transition to be visible).

What can be going wrong? 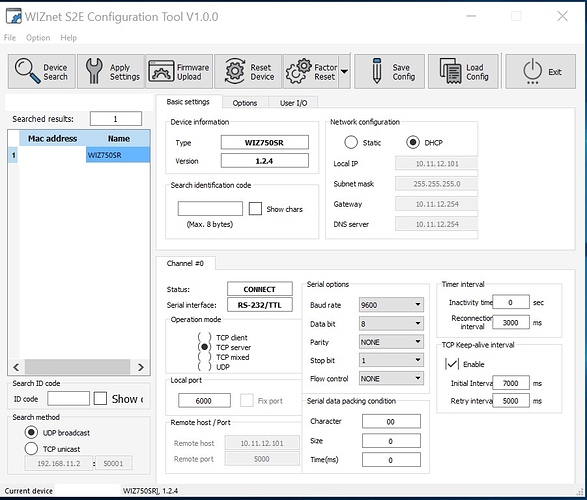 Isn’t there any terminal character like ‘0x0d’, ‘0x0a’ to send data from SSH terminal Putty to Serial Putty?
The greeting message has that so that it was transferred but following message seems not to have it.
Can you check it again?

I changed the SSH Program. There was some problem with PuTTY, basically it was outdated. So switched to Hercules, as seen on other Wiznet forum posts and it worked just fine.

Still Wondering what has changed on TCP/IP from the days of PuTTY that its SSH Terminal is not working. Maybe there is something with the settings that needs to be changed. I will check it later when I am free.

Thanks once again James!

Hi @neo I used Hercules to send data from the
Arduino to another PC via WIZ750-SR-TTL using UART communication without the Evaluation board, and and check the data on the Software Hercules, and on Hercules I was shown that the connection is established but was unable to get the data which I sent on the Hercules. So can you please guide me the steps which you worked on to work with Hercules?

I am assuming you are running Hercules on PC and using it as a receiver to check data bytes.

Once these steps are done then you may start sending UART data from Arduino.

If you still cannot see any data on Hercules, verify your Baudrate between Arduino and WIZ750-SR-TTL. Alternatively, you may check if Arduino is communicating using Hercules in Serial COM mode.

Hi @neo,
I have got the WIZ750SR-TTL0 board but do not have the evaluation board, so can you suggest me some other alternative to view the data sent from the Arduino on the PC via WIZ750SR-TTLL? As I tried Python socket programming but it showed an error in connection despite the connection being established when I typed “ping IP address” on the command prompt.
On Hercules, I was shown connected but I didn’t have WIZ750SR-EVB.